TraVelGAN - a new approach to the problem of unpaired image to image transformation.

We have discussed the CycleGAN architecture in a recent post.  CycleGAN is a GAN architecture for learning unpaired image to image translations. Unlike other approaches such as CycleGAN to this difficult problem, a new architecture called TraVelGAN does not rely on pixel to pixel difference between images.  So it doesn't use any cycle consistency constraints (2 GANs helping each other out internal to the architecture).  Instead, it uses a new module called a Siamese Network. 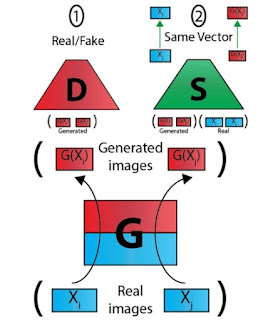 Marco Pasini has a good blog post called 'A New Way to Look at GANs', that provides a good overview explanation of what a Siamese network is all about.

The introduction of a Siamese network into an overall architecture allows for organizing the latent space associated with the algorithm it is working within.  It allows an image to be encoded to a latent vector.

The paper on the TravlGAN architecture 'TraVelGAN: Image-to-image Translation by Transformation Vector Learning' can be found here.