The Raspberry Pi 400 is hot off the presses just announced.  The form factor is interesting. It's a compact keyboard with an ARM-based computer built in.

Hard to beat the pricing. $70 for a standalone machine, or $100 for a bundle that includes a mouse, power supply, microSD card, HDMI cable, and a manual. 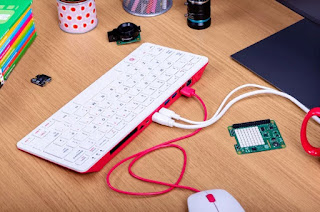 You need to use the USB-C Port for power,  There is a microSD card slot for storage.  There is a GPIO header for more esoteric purposes.  Such as???

And what are those mysterious GPIO pins?

ARM is the hot neighborhood to be in these days.  Apple is switching their entire computer product line from Intel CPUs to ARM CPUs.  Nvidia just bought ARM, so look forward with drooling lust to ARM based computer substrates that include Nvidia GPU cores tightly integrated for maximal performance.

Microsoft Surface has tried a few bumpy ARM landings before, but the pressure from what apple is doing is going to force them to put a decent ARM windows system together.

Here's the Arstechnica review of the Pi 400.